A Tale of Two Clematis

While walking the Endor Trail through the heart of West Sanford with Julie this week, our olfactory senses were overwhelmed by the incredibly sweet scent of clematis blossoms in the late evening air.

This post began as a celebration of the wild clematis, a.k.a. virgins bower, Clematis virginiana, a common native NC wildflower which can be seen in abundance alongside roadways and field margins this time each year. The masses of small white flowers are unmistakable and hard to miss, since they seem to have found a foothold in almost every suitable site in recent years. 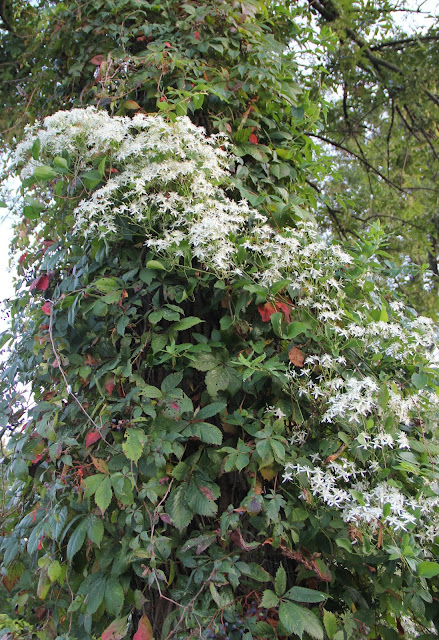 The distinctive blossoms are so striking, we decided to share photos from every angle, from both near and far. It was in selecting the best angle for one of the "near" shots, that the problem became apparent. 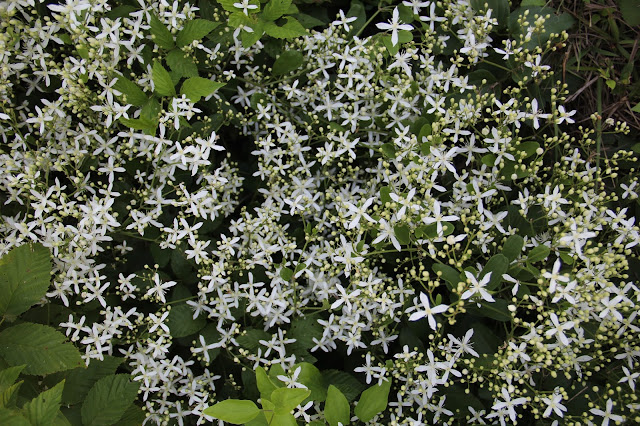 This lovely native which had literally smothered many of the other plants in its domain with its sweetly perfumed embrace, was not Clematis virginiana! It was, rather, one of those pesky naturalized aliens we were discussing just yesterday. Clematis terniflora, sweet autumn clematis, native to Asia, brought here as a garden plant, escaped and naturalized in many areas, and displaying all the characteristics here of an invasive species. In fact, it seems well on its way to dominating this particular stretch of stream bank. 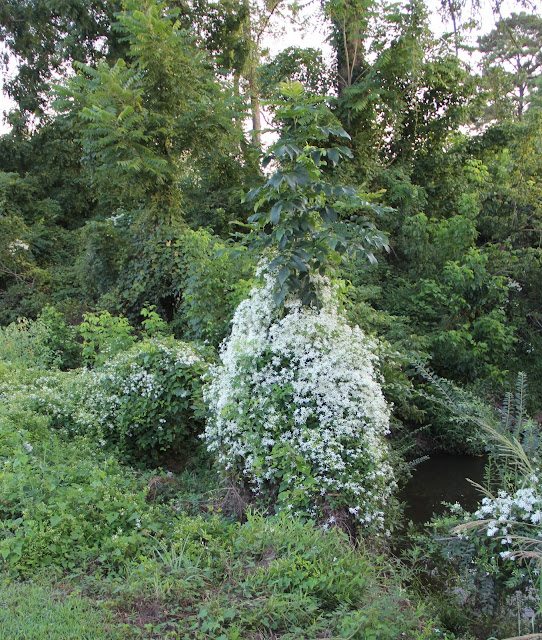 It was an honest mistake. The vines' most showy feature, their blossoms, are very similar in appearance. The leaves, however, are a different story. The virgin's bower, native to western NC and naturalized in much of the piedmont, has a trifoliate leaf structure with distinctly toothed leaf edges. Our deliciously scented interloper has smooth edged leaves which can be distinguished at a glance from the native species.
Boy was I bummed! In an instant, my beautiful native had morphed into a despicable intruder, and my celebration was ruined. 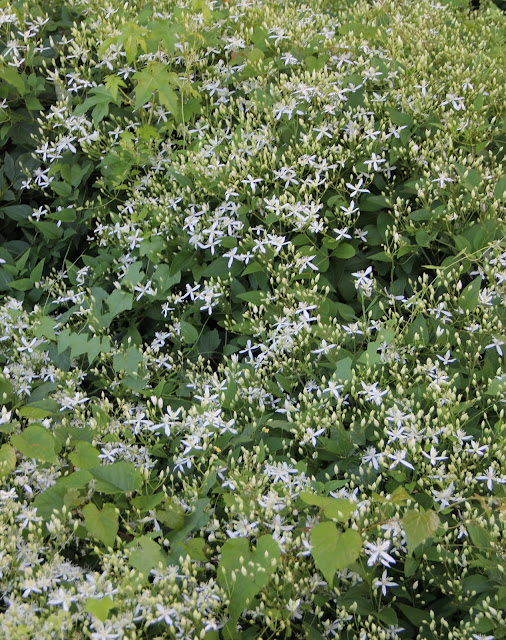 Then I spotted this solitary potter wasp, Monobia quadridens, busily feeding from the fragrant snow capped mountains of greenery, the veritable nectar fountains of the clematis vine. Perspective returned. 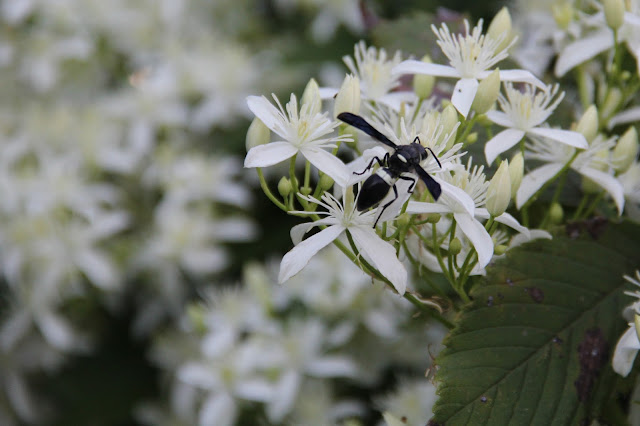 I decided to continue my documentation, albeit with a slightly different slant. The "invader" became just another contributor to diverse plant population along the creek. In places, this orange jewel-weed was almost as abundant as the clematis, and the blackberry briars left plenty of evidence on my bare legs of their relative abundance as well. 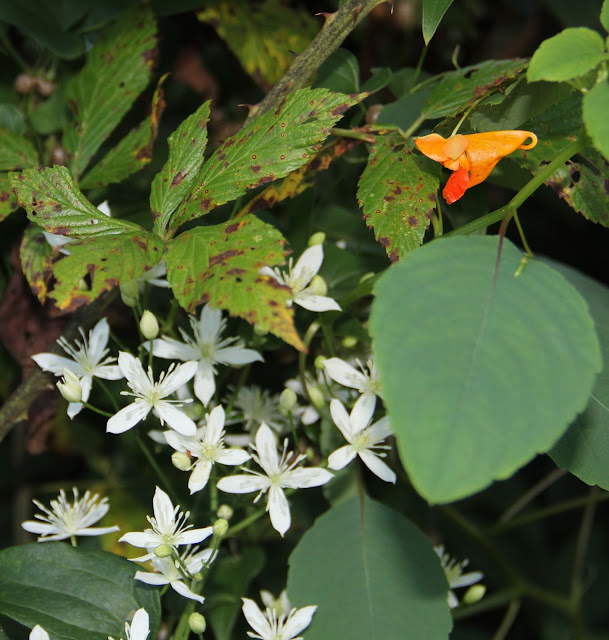 While our native Clematis likes a sunny locale, C. terniflora appeared to be thriving in both the sun and shade, a definite advantage along some of the twists and turns of the creek. 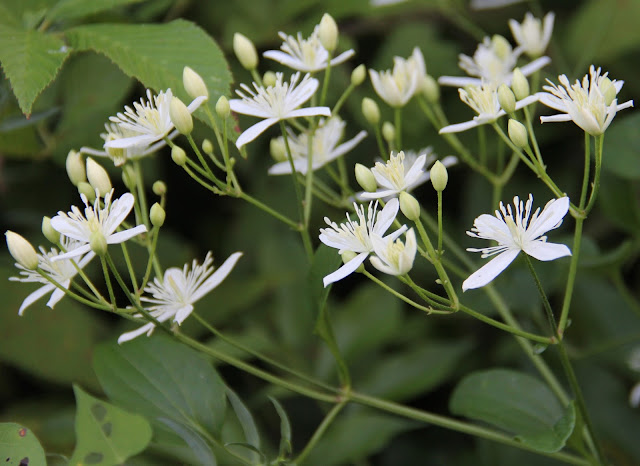 In many places, it was difficult to discern the foliage associated with the vine because of the many other weeds competing to thrust their leaves into the light. 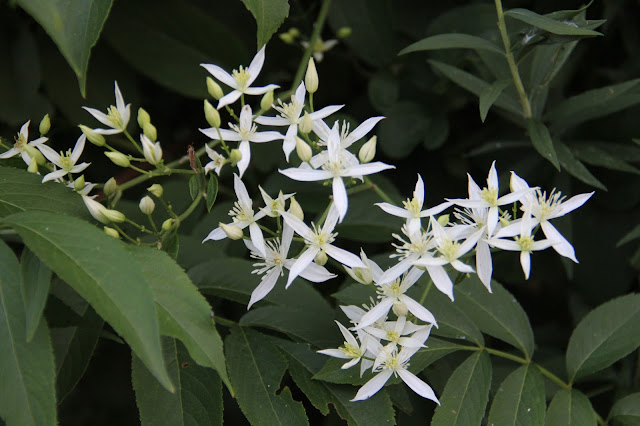 And, wow, the blossoms are as beautiful as they are fragrant and abundant. 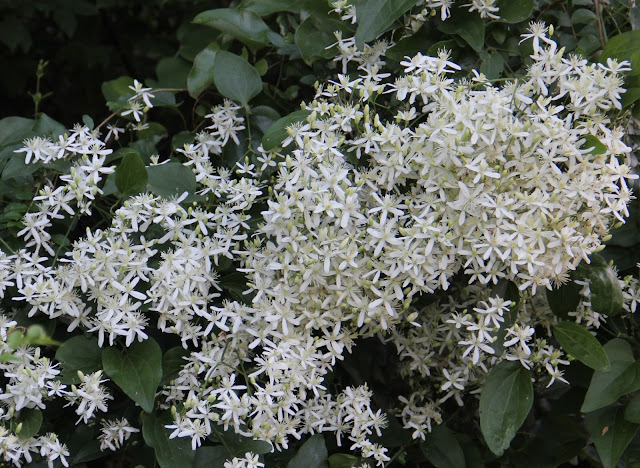 As the sun sank low in the west, I was left to ponder anew this notion of native vs. alien, and consider again the place in our ecosystem of this vivacious vine alongside such problematic southern icons as kudzu and Chinese privet. 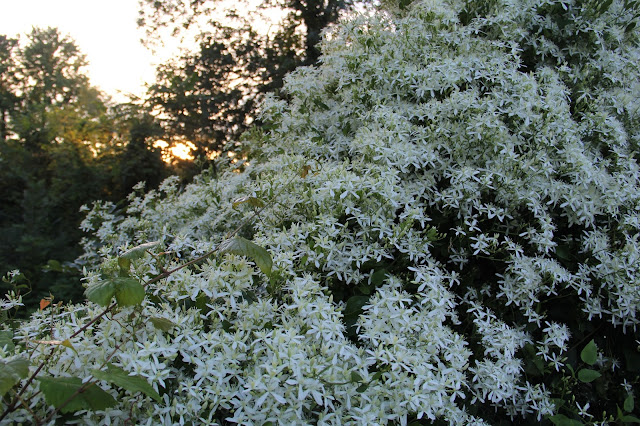 Virtually everyone that passed us on the trail commented on how lovely the flowers were. One noted how lucky we were that the "honeysuckle" was still blooming! (They were most likely referring to another famous sweet-scented invasive, Japanese honeysuckle.) 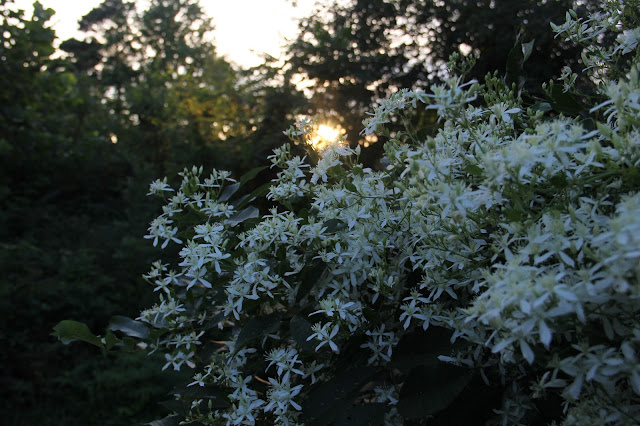 This web of life is becoming rather more tangled as I type. 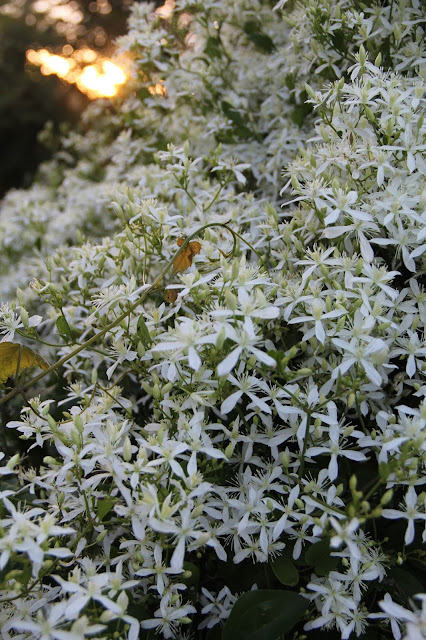 But no less fascinating, engaging and intriguing... 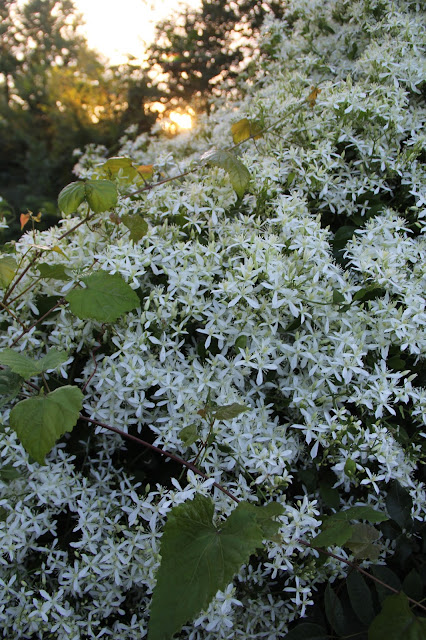 and arguably ever more beautiful. 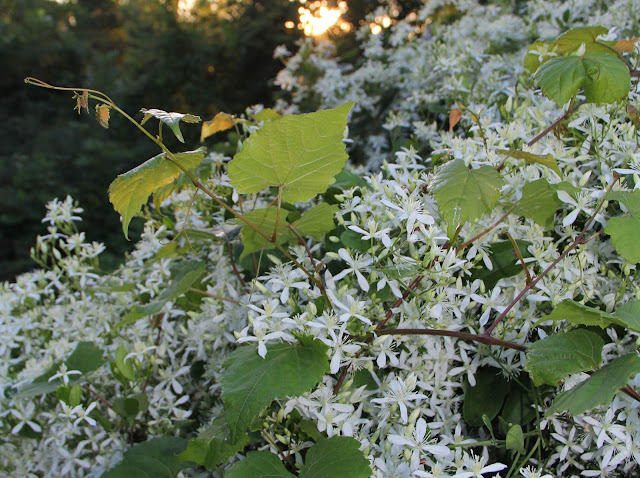 Plenty of questions to sleep on tonight. 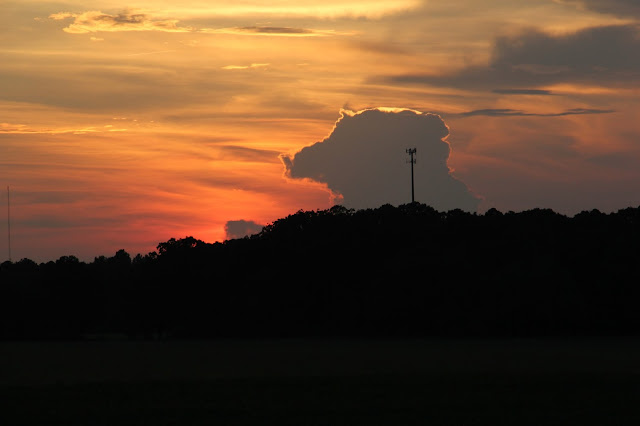 Wait! Is that a giant pig up there devouring the sun?
Posted by hootowlkarma at 10:57 AM