It's high noon in mid-July, and we're melting in the midst of the milkweed.
Cooling showers are on the way, but for now they're nothing but a distant rumbled promise in the still, hot air.
Only a single flowerhead brightens the formerly blossom-laden roadside stand, though abundant new growth offers hope for late summer nectarers.
Hunter and I are here for the monarchs, hoping to catch a glimpse of a plump caterpillar or two, feasting among sturdy, heavily veined foliage of the imposing five foot stalks. 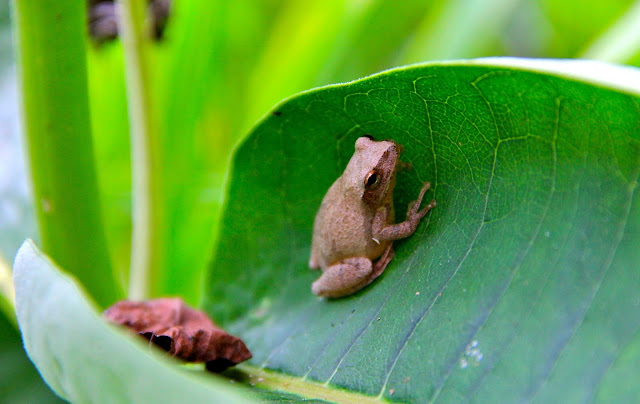 A quick initial survey reveals nothing stirring but a single immature katydid, and a more thorough inspection yields naught but a motionless wheelbug, poised to pounce at the first sign of prey.
We turn to go, thoughts advancing to the next likely milkweed stand along our way, when a strongly curled leaf near the far side of the patch catches our eye.
A single stride brings us to the emerald brink, and a quick peek inside finds our old friend Pseudacris crucifer peering back. 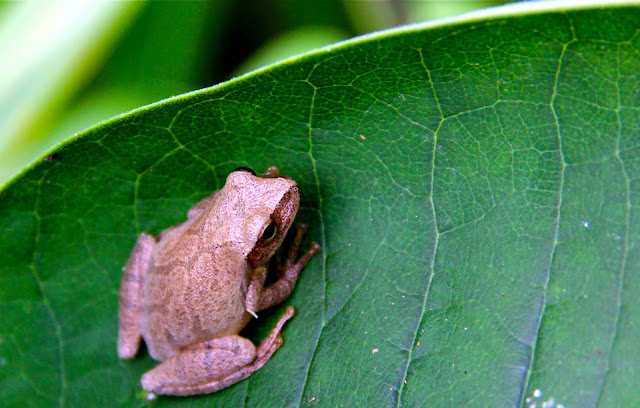 What a delightful surprise; spring peeper, likely to be ambling about in a rain-filled ditch with nighttime temps still in the 40's (Fahrenheit) in February, chilling here in the shade of the milkweed with temperatures nearing 95 degrees in July. Unexpected, but certainly not inappropriate.
After all, our little tree frog is a most efficient predator of small insects, and there is no shortage of insects in the roadside milkweed patch. Our disappointment at the dearth of caterpillars thoroughly assuaged by this amphibious surprise, we wander on, wondering as ever at nature unpredictable...
Posted by hootowlkarma at 6:57 AM No comments: