When time springs forward each year in the heart of Carolina, the lost hour of sleep is immediately replaced by an "extra" hour of daylight. Hoot Owl Karma chose to spend that extra hour today in search of another early blooming wildflower, the rue anemone. Upon entering the woods in a likely spot beside a meandering woodland stream, the quester was greeted by a strident chorus of frogs arrayed along the margins of the deeper pools. While hundreds of voices were involved in the performance, a single diminutive northern cricket frog was the only visual evidence of amphibians to be found. 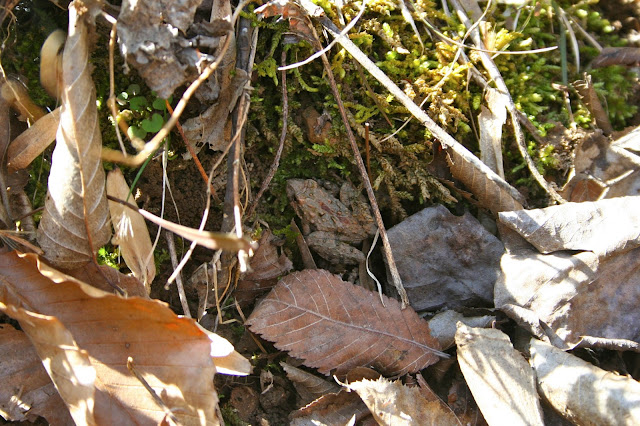 Just a few yards up the hillside, this brown-skinned basker seemed determined to make the most of its extra hour of sunlight as well. Carolina anole may soon take on its cloak of green, but for today, brown was definitely the color of choice. 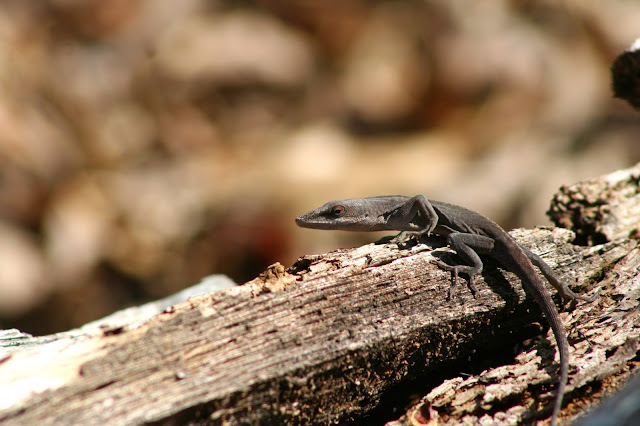 While scanning the bottomland for the telltale blossom of the anemone, the wanderer observed other signs of spring. Dozens of these striking stems dotted the floodplain along the stream, teasing the observer with just a hint of their true identity. 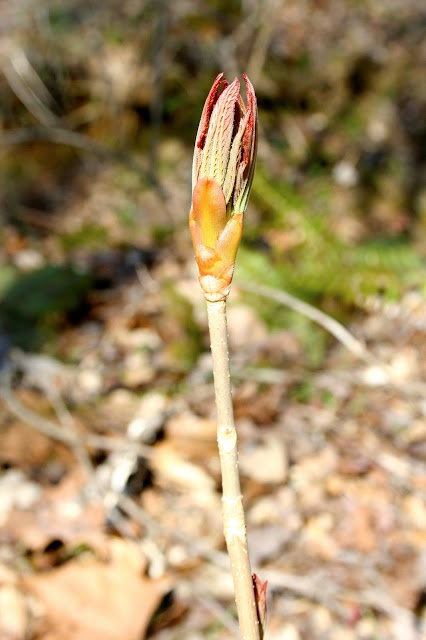 A bit farther along, their intrigue abruptly ended when this complex matrix of 5 pronged leaves gracefully unfurled. The red buckeye would be well represented in these parts this year! 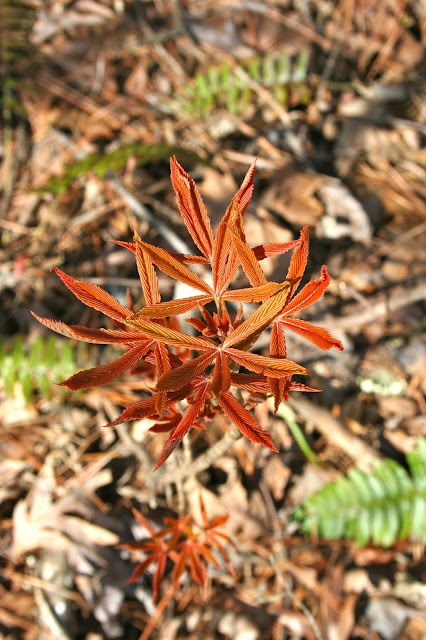 Suddenly, and at last, the rue anemone! Invisible for a time in the sun-dappled expanse of browns and tans and faded browns on the forest floor, but glaringly obvious once the image of the first flits across the visual cortex of the seeker, several individuals now spring into view. 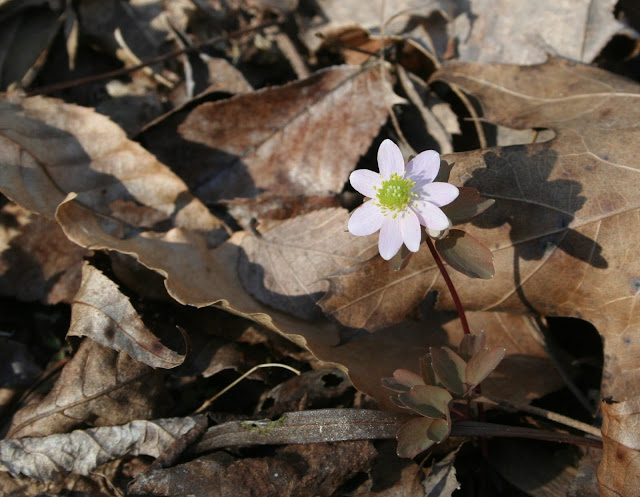 Judging from the small numbers and the early stage of the blossoms, we caught these lithe beauties just after their initial emergence. Whether blessing, good luck or karma, we're grateful for the cosmic juxtaposition which allowed us to complete our trifecta of hepatica, anemone and spring beauty with rather little effort on this gorgeous afternoon. 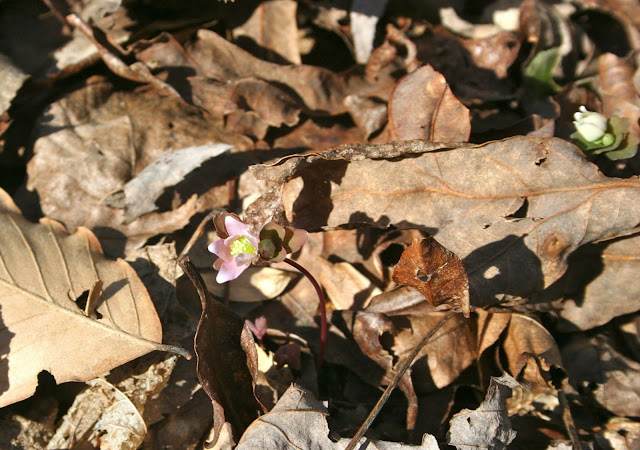 A parting look, then out of the woods for a while. We'll have to settle for the domesticated spring blossoms for a few days until we can slip away for another walk on the wild side. 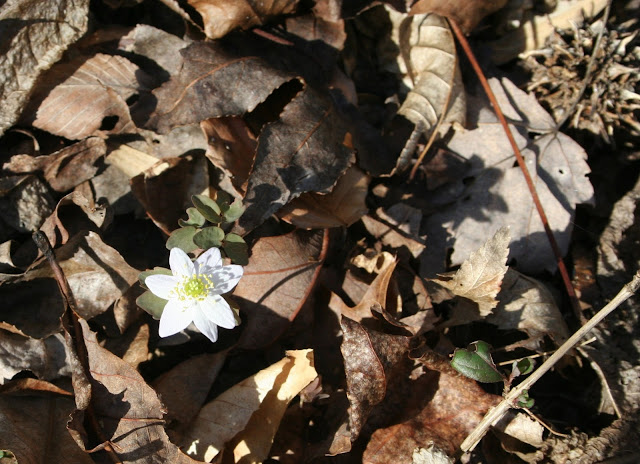 Snapshots of a Snapper with the Griffin Scholars

Yesterday's nature excursion with the young scholars of Griffin Academy was blessed by brilliant sunshine, not too brisk temperatures and tremendously enthusiastic adventurers. Armed with nets and plastic containers, our intrepid nature explorers captured an impressive array of dragonfly nymphs, tadpoles, minnows and snails, along with gobs of slimy green hair-like pond scum or filamentous algae, most likely colonies of spirogyra.
Our bold young Griffins also showed off their photography skills when confronted with a rather large and apparently rather dead common snapping turtle. 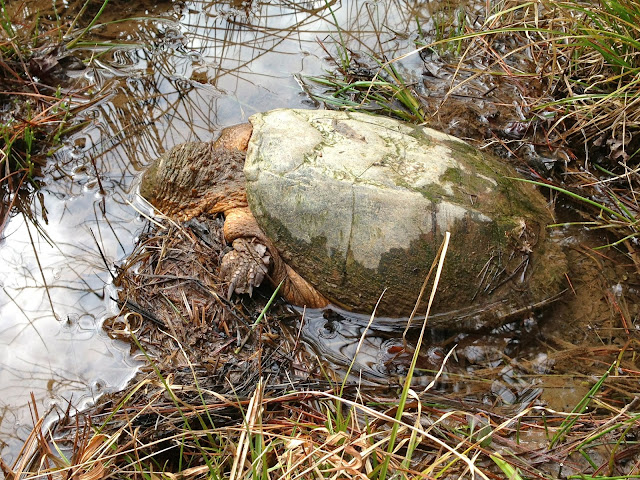 Chelydra serpentina is North Carolina's largest native turtle, and this fifteen-pounder had apparently succumbed to the cold of winter or perhaps old age. 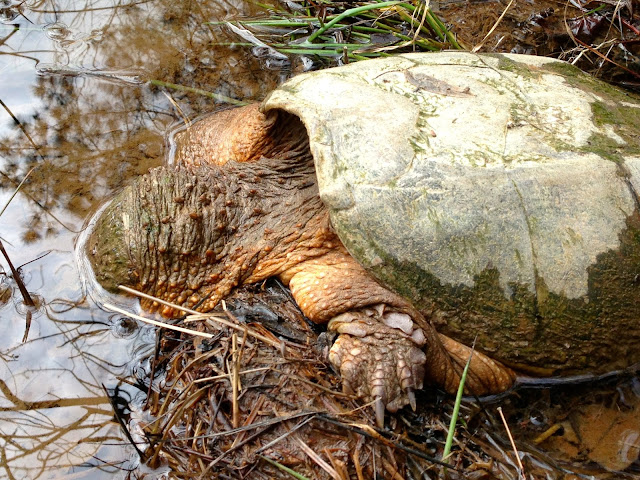 Inappropriate attire notwithstanding, Mr. Jimmy gingerly retrieved the carcass from the water's edge so that the students could have a closer look, as they documented the procedure with a handy-dandy iPhone camera. 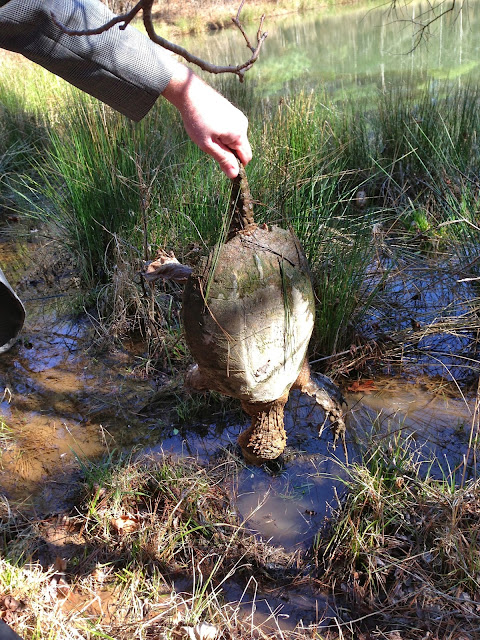 Imagine their suprise when the decidedly not-dead reptile suffiently shook off its late-winter torpor to demonstrate for everyone the origins of its common name by attempting to carve up the toe of Mr. Jimmy's entirely inappropriate footwear! 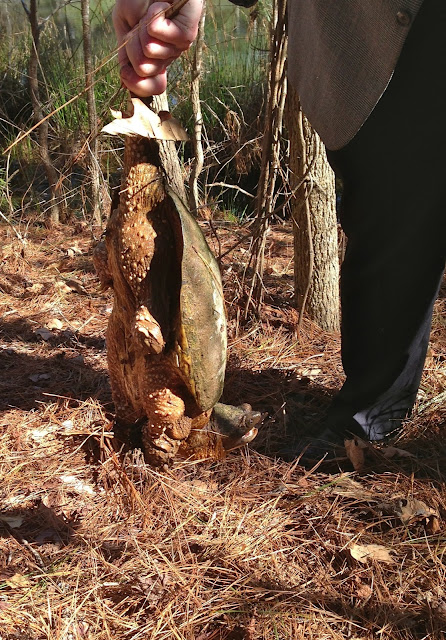 With the "snapper" re-oriented away from all the nearby toes and ankles, everyone took a moment to appreciate the awesomeness of this fully alive and operational predator from the depths. 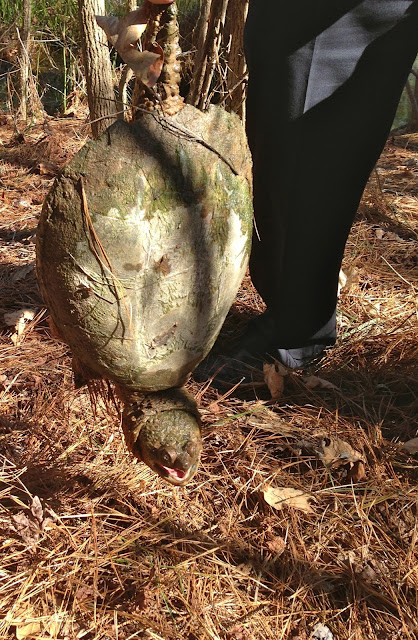 A truly awesome creature, extremely well-adapted to its aquatic environment. Its impressive tail was nearly as long as its carapace, and more than one child compared it to a dinosaur's. The head was massive, with really cool-looking eyes, and mouth exceedingly well-equipped for grabbing and holding slippery prey. The shell sported a healthy growth of algae, which would obviously serve its host well in the business of camouflage on the bottom of the pond. 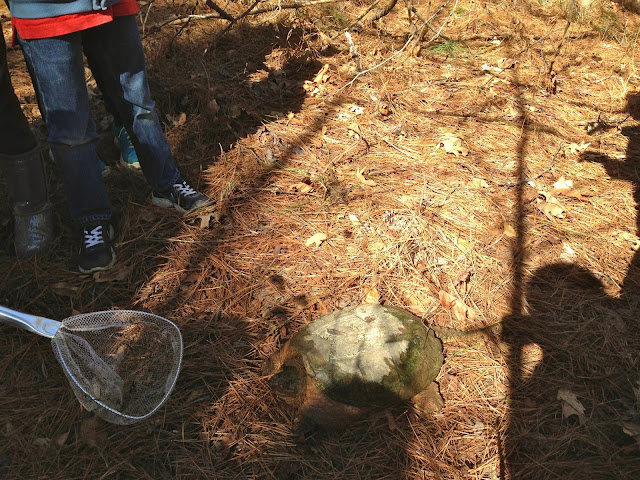 Our budding young scientists thoroughly exhausted Mr. Jimmy's knowledge of these extraordinary creatures, and left him with plenty of questions to be researched later. 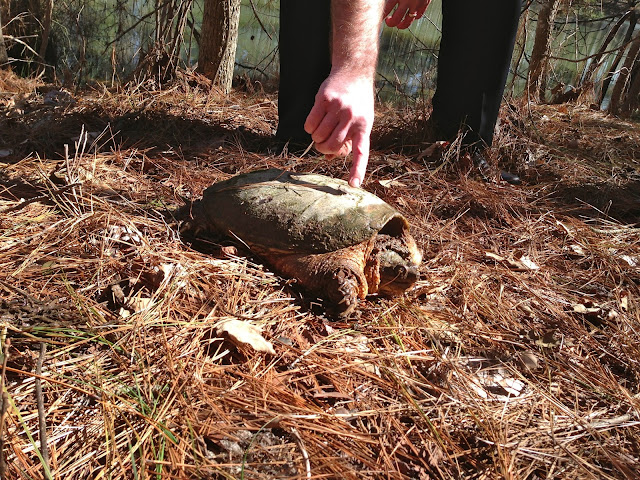 Presumably much relieved to be finished with its fifteen minutes of fame, the subject of our brief but enthusiastic examination hunkered back down into the mucky bottom from whence it was so unceremoniously extracted, most likely resuming the not quite finished business of its long winter's nap. 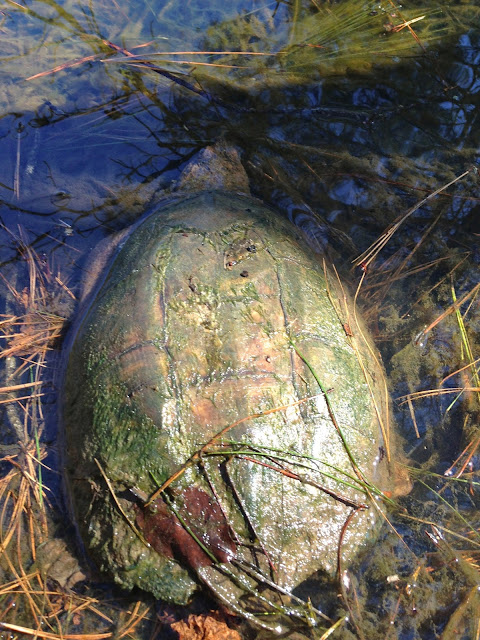 Farewell, old turtle!
Posted by hootowlkarma at 9:29 AM 1 comment:

*Karma Note... A helpful reader suggested that the "marsh marigold" pictured below was actually figwort or lesser celandine, an invasive non-native species which is often confused with marsh marigold, of all things. Duly noted, and such assistance is always welcome! (JR, 4/1/2013)
Winter's chilly grasp still asserts itself each evening here in the heart of Caroline, and the morning chill reminds us that Spring has not yet sprung. But a short meander off the beaten path reveals a couple of upstarts, determined to get a head start on their early spring rivals by braving the chilly air - Spring Beauty and Marsh Marigold. 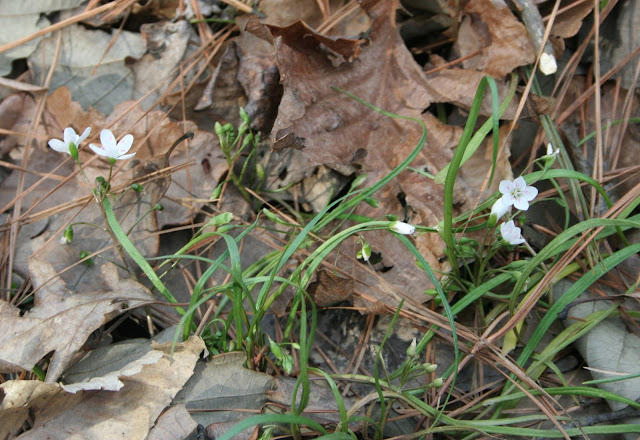 Spring beauty has many manifestations across our region, with these individuals a bit paler than many of their kin. 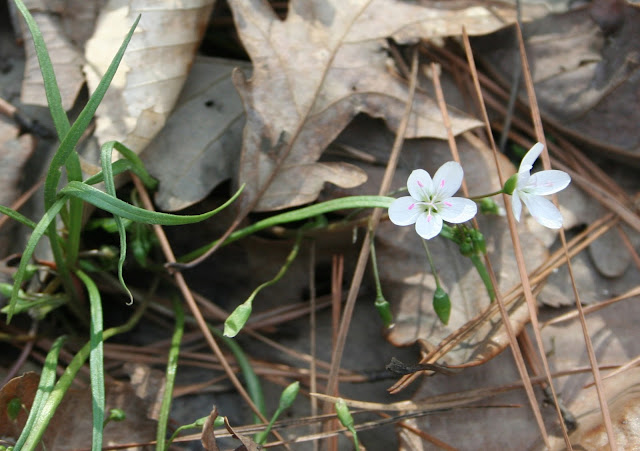 While these early bloomers often form impressive colonies, this tiny clump had staked its claim to a small patch of sunlight alongside a temporary stream filled by the recent heavy rains. 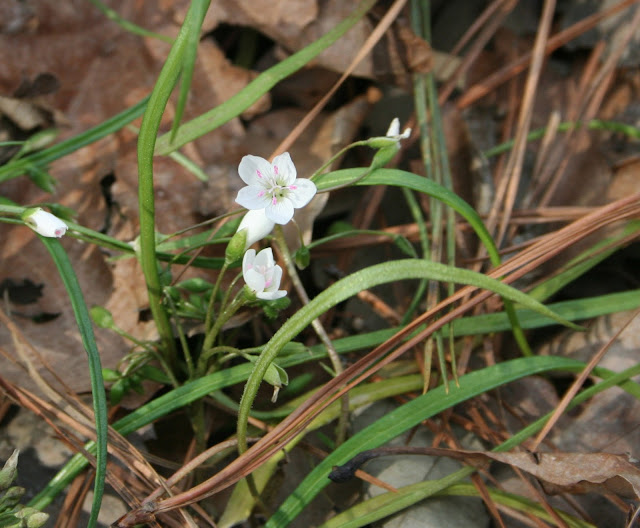 Not far away, at the junction with a larger creek, a pile of debris deposited in the floodplain by a larger rain event in the distant past gave shelter to a mass of bright green leaves belonging to this marsh marigold*. 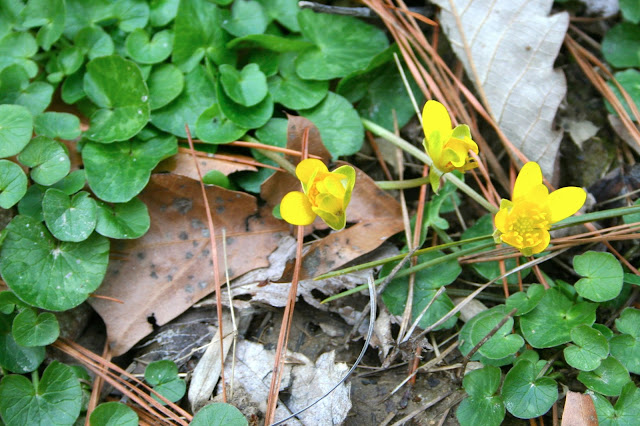 These outliers were blooming even earlier than the rest of their clan; lending the otherwise lifeless marsh the green and gold hues of summer or early autumn. 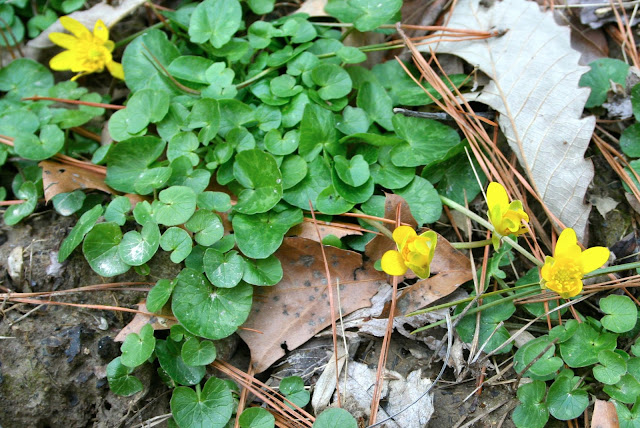 This particularly bold blossom seemed determined to overshadow the discarded automobile tire inside of which she found herself contained. Faced with such a bold and valiant vanguard, can Spring herself be far behind? 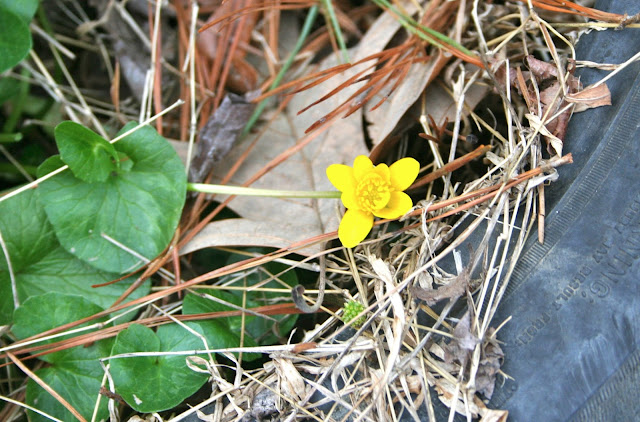 Posted by hootowlkarma at 2:23 PM No comments:

The northern cardinal is without doubt one of the most familiar North American songbirds. A Google search for cardinal bird yields more than 150,000,000 hits, an indicator of this bird's near-universal appeal and the wealth of readily available information related to it. 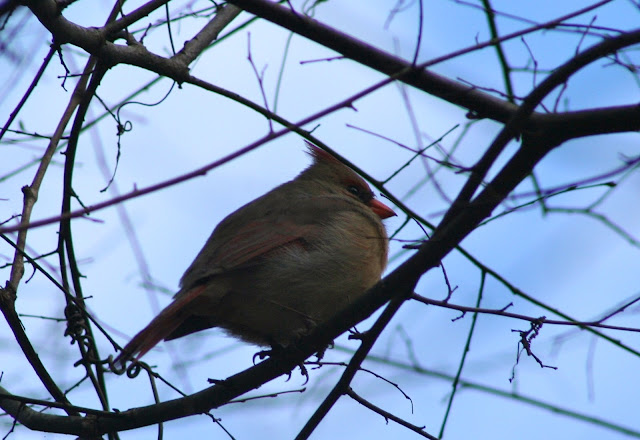 Common and familiar though it may be, whenever I encounter images of nature's brilliantly clad birds from around the world, thoughts of the northern cardinal bring me right back home. 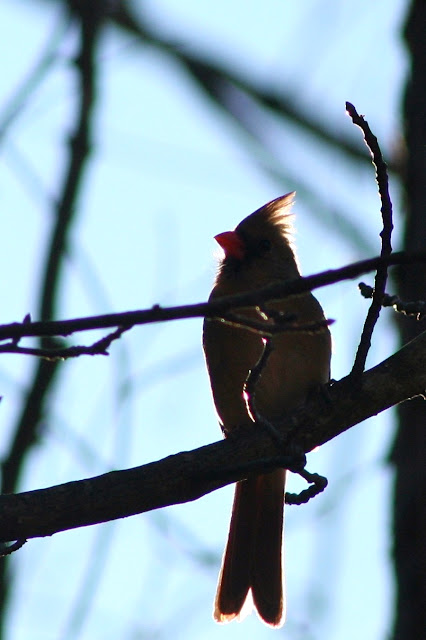 For, though the panoply of fantastic blues and greens and yellows adorning the inhabitants of some exotic locale can be absolutely breath-taking, the scarlet clad crooner perched by the feeder out back  can hold its own with them all in my eyes. 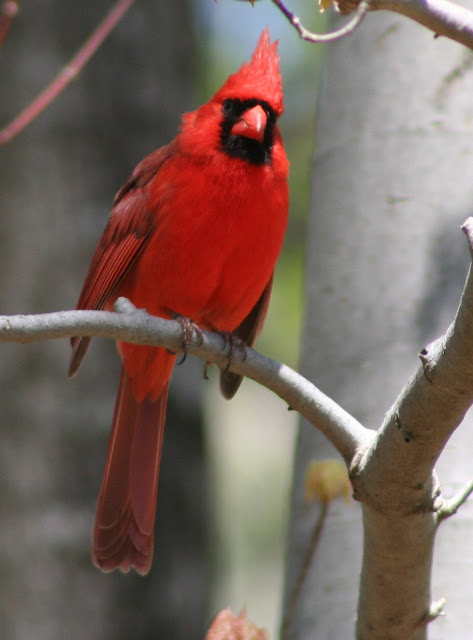 Poets and philosophers have long attested to nature's palliative powers; soothing the cares of the day, easing life's burdens in some small way. For all their skill with words and eloquent elocutions, the wordsmiths might do well to pause in silent contemplation when confronted by nature colored thus... 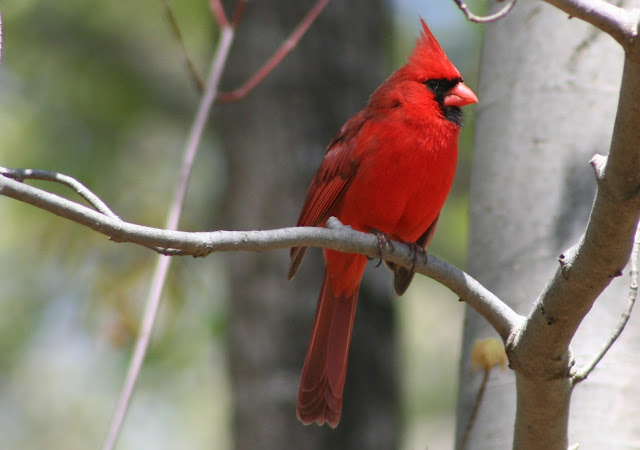 Peace, my friend.
Posted by hootowlkarma at 9:00 AM No comments: