Listen to the Frogs...

Just pull his string, and Sheriff Woody belts out the bad news.
There was a brief period in our household when we knew practically all of Woody's lines from
Toy Story by heart,
and little voices posed questions like:
"What is a waterhole?"

"But how did Woody know the waterhole was poisoned?"

"What was it poisoned with?"

I thought of  'ol Woody the other night when Hunter,
no longer possessed of that little voice,
but as inquisitive as ever,
took advantage of a rainy night to document a few of the amphibians ambling about the neighborhood. 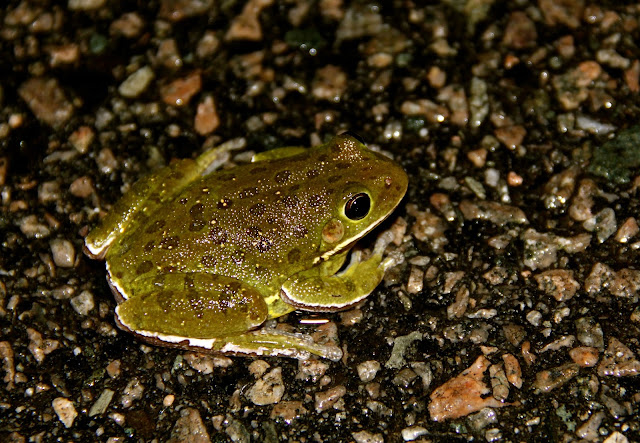 This barking treefrog, Hyla gratiosa, didn't have much to say,
intent as it was upon safely traversing the traffic, 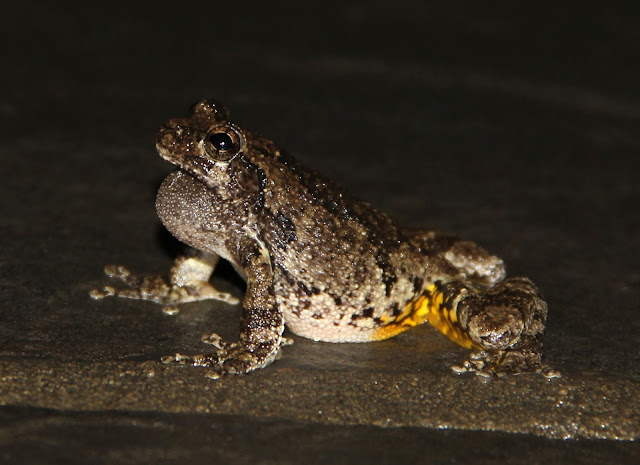 but the Cope's gray tree frogs, Hyla chrysoscelis, had quite a story to tell,
as they gathered by the fountain. 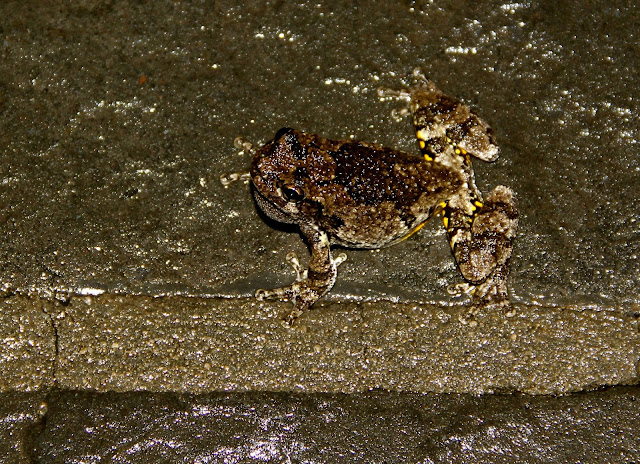 Their piercing trills,
practiced and perfected over a few thousand thousand rainy nights, 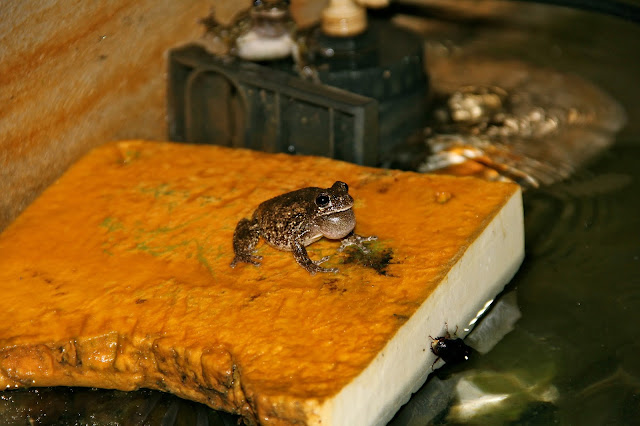 amounted to a passionate anthem of life, 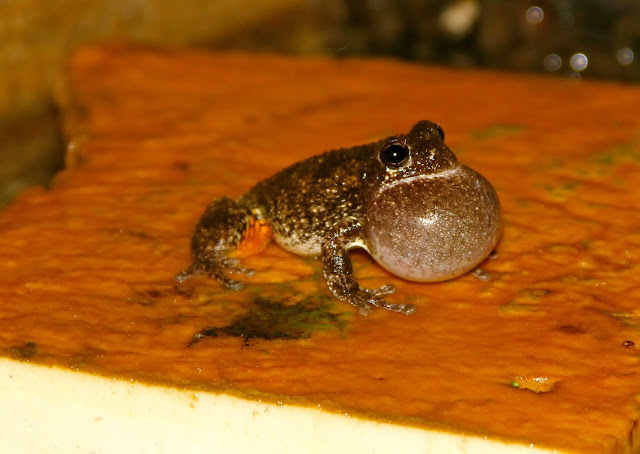 ecstatic echoes reverberating in our ears, 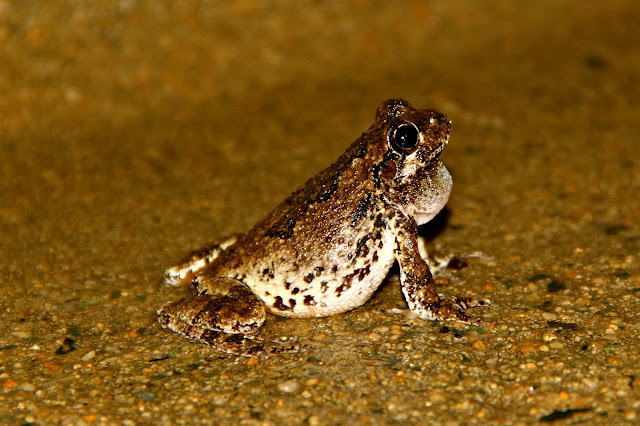 as dozens of ardent males,
in and around the waterhole,
eagerly advertised their availability 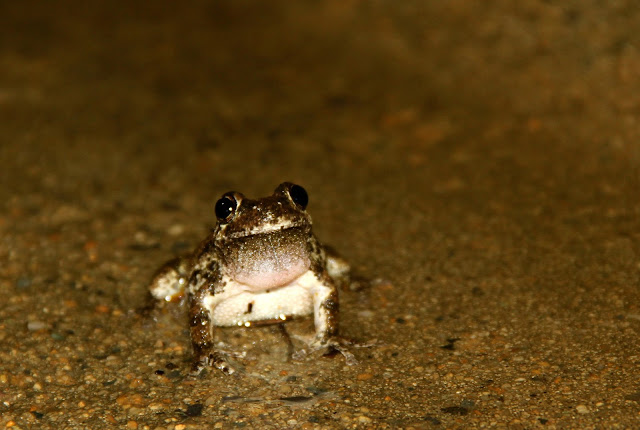 to swim with a willing mate in this impassioned dance of life. 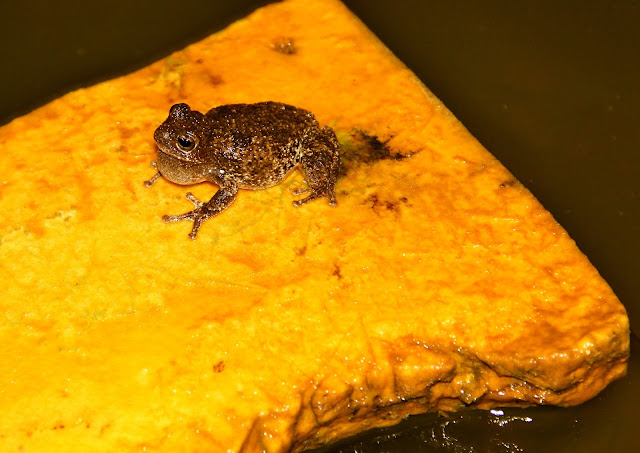 A rendezvous in the rain,
insuring the future of their tribe for a few moons more;
another generation born of seed sown in the life-giving waters from heaven. 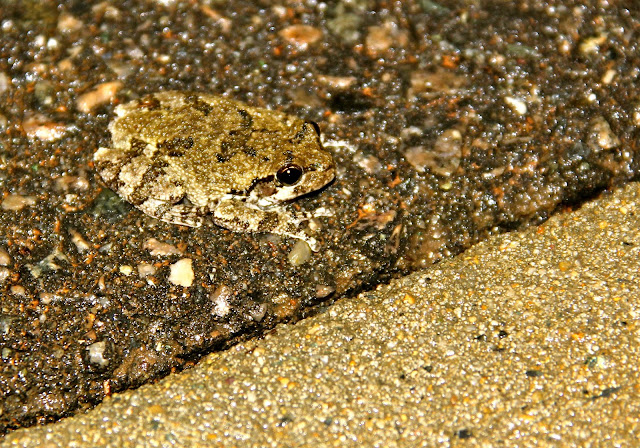 Embryos forming in an ephemeral pool,
free of fish and other pond-dwelling predators;
tadpoles maturing, quickly,
before the waters vanish, and young frogs with them.

North Carolina's amphibians, like those around the world, have declined precipitously in recent years, primarily due to habitat loss and degradation, which in turn make them more susceptible to disease. Because of their unique dependence on both the aquatic and terrestrial environments for survival, frogs are extremely sensitive to environmental degradation.

Even now, when we pull the string on that old Woody doll, the urgency in his voice is clear,
"Somebody's poisoned the waterhole!"

We humans have always shared the amphibians' dependence on life-giving water,
and in the face of their continuing rapid declines,
perhaps we'd be wise to listen to the frogs...

Thanks to Hunter for sharing his frog photos for this post.

Posted by hootowlkarma at 7:28 AM No comments: