Somewhere around the 4th of July, the questions would start. "Them worms come yet?" or "Got any o' them worms this year?" or maybe "Can I come get some of those worms?" 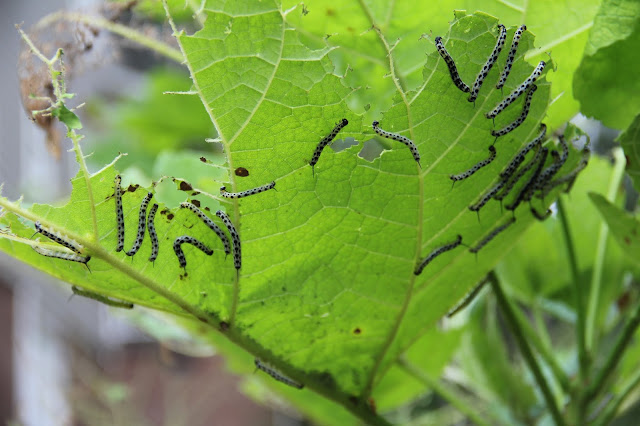 I now know that "those worms" were catalpa sphinx moth larva, Ceratomia catalpae,  but as a 10 year old growing up in rural Harnett County, they were simply Catawba worms, quite possibly the best fish bait known to man. 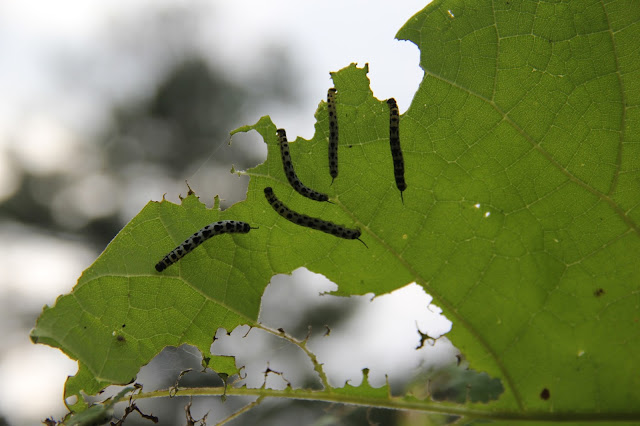 Each year, somewhere around mid-summers eve, they magically appeared on the catawba (catalpa) trees in Granddaddy Clark's yard; thousands of tiny, very hungry, fast-growing caterpillars. Many a "worm" subsequently left his yard in a coffee can with a couple of big green leaves crammed in for fodder. In fact, most of the catawba worms on his trees ended their lives as bream bait, never experiencing the joy of nectaring at the four-o'clocks as adult moths. 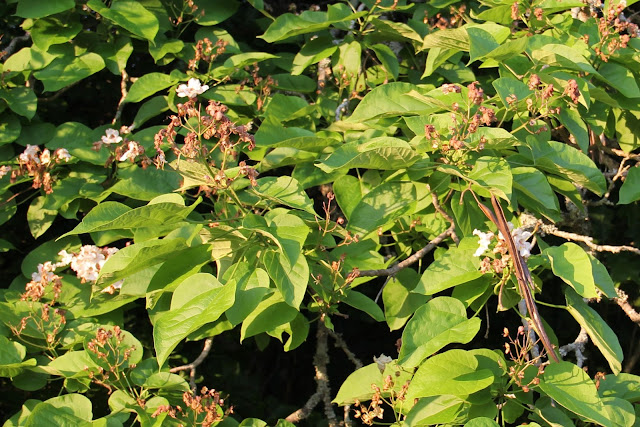 The catalpa tree, a member of the Bignonia family, is a native of the southeastern United States, but it is most often encountered today in yards and fields where it was planted for its ornamental value. Its large clusters of ruffly, tubular blossoms are somewhat reminiscent of the blossoms of the crossvine, a not-too-distant cousin, and its numerous long, bean-like seedpods are the source of catalpa's common names, cigar tree and Indian bean tree.  The mature trees have a handsome shape and bountiful large green leaves. 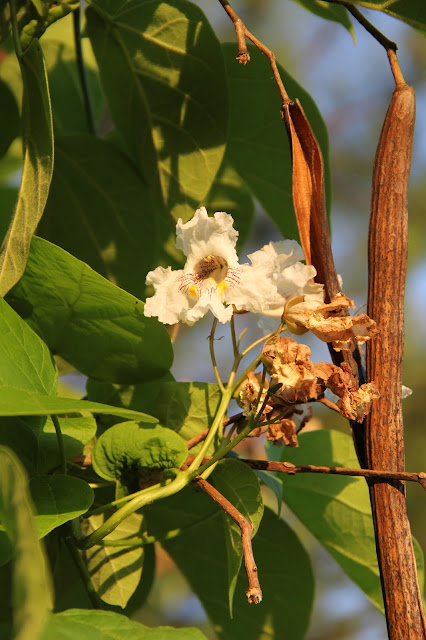 Oddly enough, the common vernacular name of my youth, catawba tree, is apparently the more correct version of the name, which derived from the fact that this tree was the tribal totem of the Catawba Indians. The first botanist to formally describe it, however, misspelled the name as catalpa, and under international scientific conventions, that original description remains the official scientific name. 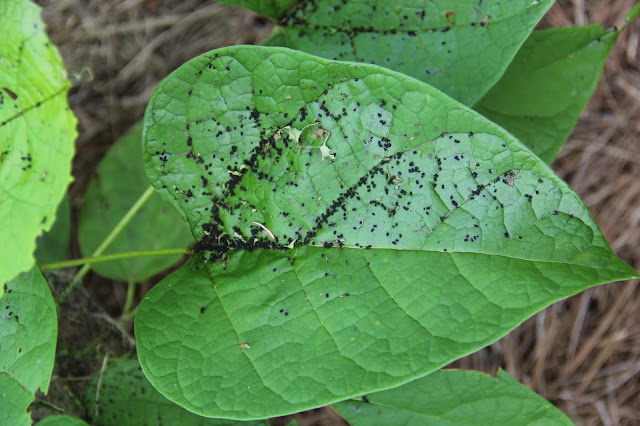 These impressively large, beautiful green catalpa leaves appear for the moment to have escaped the voracious predation of the troupe of recently hatched and very hungry larva, but the accumulation of frass, or caterpillar poop, leaves little doubt about their place on today's menu. 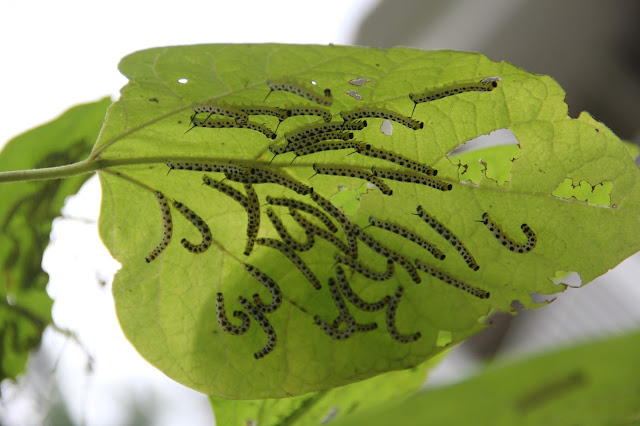 In fact, a quick glance at the underside of a neighboring leaf reveals the source of the fate that soon awaits the leaves below. 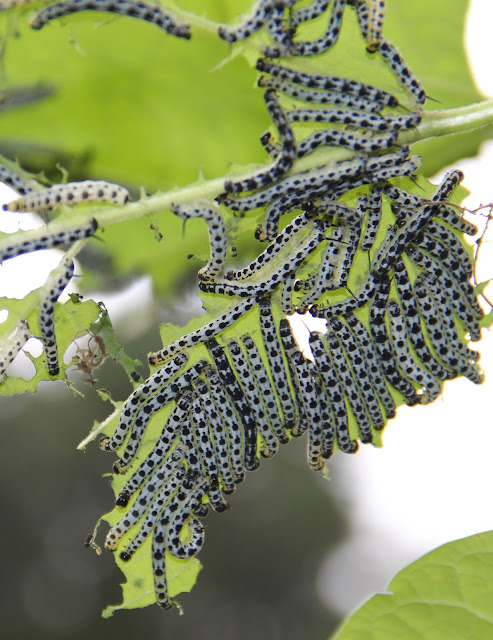 A bit higher up the tree, this crowd of "cats" will soon be ready to migrate to a new territory, and off to the left we see what they'll be leaving behind when they depart. 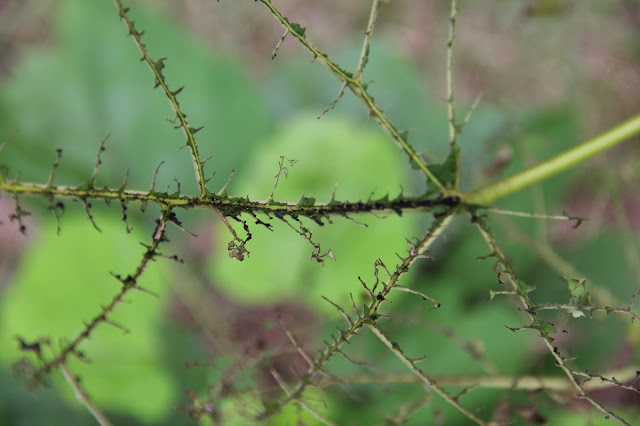 Even severe defoliation such as this should not damage the tree, which will almost immediately produce new leaves. However, repeated defoliations in a single season for a young tree could prove fatal. 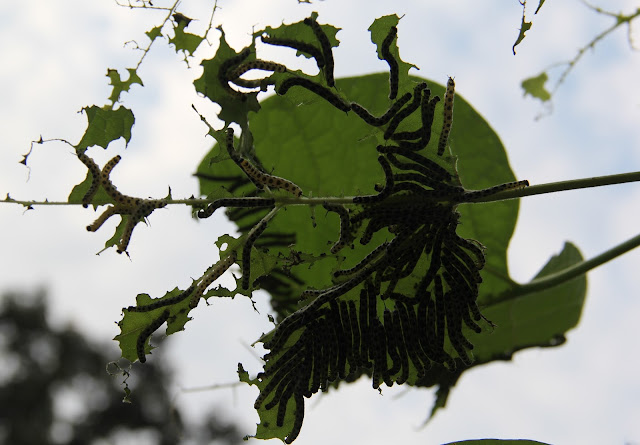 The adult catalpa sphinx that deposited her eggs at the base of the tree was probably part of a brood much like this which hatched earlier this summer. Her offspring should mature in time to pupate, emerge and lay their eggs this year, but the next generation will probably pupate and overwinter before emerging next spring to start the cycle again. 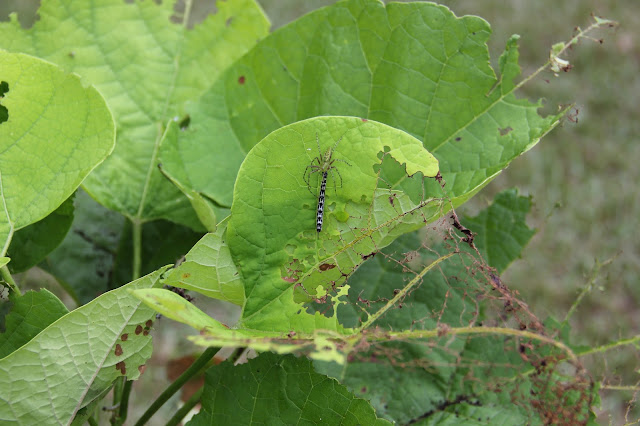 As we ponder this cycle which has been repeated thousands of times over hundreds of human lifetimes, nature reminds us that there are many other players upon this stage called life. 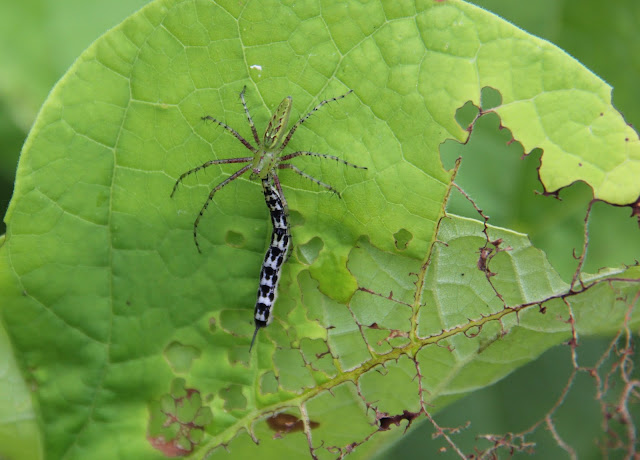 Topside again, we see that there is more on today's menu than just catalpa leaves. The green lynx has dragged her prey from the midst of its brethren, and the energy of our sun, stored in the broad green leaves of the catalpa, flows from a moth which will never fly into the maw of the predacious spider, and from there... who knows? One thing is sure, the bream in the pond across the street won't ever see this catawba worm dangling from a freshly baited hook.
Posted by hootowlkarma at 1:57 PM